xxxHolic (stylized as ×××HOLiC; pronounced "Holic") is a Japanese manga series written and illustrated by the manga group Clamp. The series, which crosses over with another Clamp work, Tsubasa: Reservoir Chronicle, revolves around Kimihiro Watanuki, a high school student who is disturbed by his ability to see the supernatural, and Yūko Ichihara, a powerful witch who owns a wish-granting shop. When Watanuki asks Ichihara to remove his ability to see spirits, she grants it on the condition that he pay for his wish by working for her. Clamp created xxxHolic to link the supernatural and fantasy series.
-----
Kimihiro Watanuki is a high school student plagued by ayakashi spirits which are invisible to everyone else but him. The series begins when Watanuki stumbles, seemingly by chance, into a shop that grants wishes. The shop is owned by Yūko Ichihara, a mysterious witch of many names and esoteric renown. For a price, she offers to grant Watanuki's wish to be rid of the spirits. The price, according to Yūko, must be of equal value; so, as payment, he must become Yūko's temporary, part-time cook and housekeeper. While his established job consists of household chores, Yūko increasingly sends him on errands of a supernatural or spiritual nature as the series develops. Himawari Kunogi, Watanuki's love interest, and Shizuka Dōmeki, a classmate whom Watanuki initially detests, occasionally join him in his work as per Yūko's request. The three become increasingly close, and though Watanuki is often annoyed with Dōmeki, he grows to value the new friendships he makes and his life at the wish shop. At the same time, though, he begins to worry about Yūko, wondering if she who grants wishes to others ever has anything to wish for herself. Eventually, he makes a promise to try and grant her a wish, should she have one.
-----

tldr; Watanuki sees ghosts, and ends up working for Yuuko in exchange for getting rid this ability. you know how internships go.

-----
I did not watch the anime, any notes I make about the characters are strictly from the point of a manga reader lol. I recommend reading it more than watching it anyways just because the illustrations are really beautiful, and you'd be missing that if you only watched the anime. 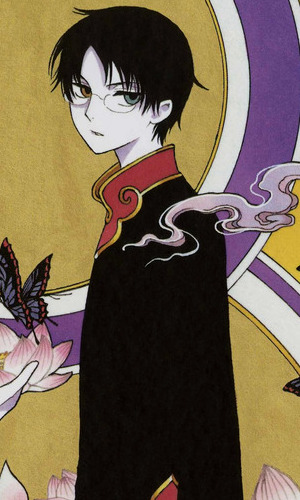 from the wiki:
Watanuki is a high school student who has the ability to see spirits, and the result disturbs him. One day he stumbles, seemingly by chance, upon the wish-granting shop of Yūko Ichihara. She promises to end his ability to see spirits if he works part time in her shop until his work equals the value of his wish. Since he lives by himself, he can cook and clean, which pleases Yūko. Besides doing domestic tasks for Yūko, Watanuki often completes jobs of a spiritual or magical nature. Yuko's often insane requests usually enrage him, though he pays close attention whenever she is serious with him. While around his crush, Himawari Kunogi, Watanuki is usually cheerful and excited, whereas around Shizuka Dōmeki he is much more irritable. Yūko advises Watanuki to become closer to Dōmeki though, as he can exorcise spirits.
-----
from me:
watanuki is kind of... just a little guy? he's a hard worker, so despite seeming to not like yuuko OR doumeki until they bond more, he'll do as he's told. I think that he's quite desperate for attention, considering he lives alone and the only person he likes at first (a girl named Himawari) doesn't pay him much mind outside of normal courtesy. What I really like about this character is that you can really watch him develop as a person. The manga is about 200 chapters, and he goes from immature and uptight to someone more mature. Without saying too much, I think it's interesting how he learns to really take care of himself. Not just physically, but he's able to figure himself out, instead of a generic "It doesn't matter who I am because I'm cool anyways" that I feel like I see a lot in manga. 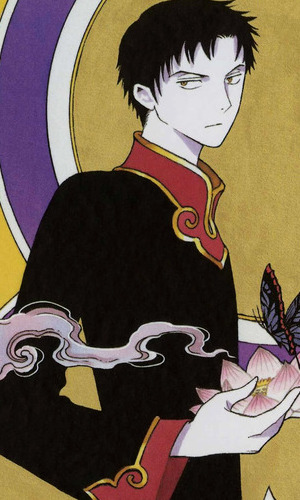 from the wiki:
Shizuka Dōmeki (百目鬼静) is a schoolmate of Watanuki. He lives in a shrine owned by his late grandfather Haruka Dōmeki, a Shinto priest who taught Shizuka about folklore and Shinto practices during his childhood. However, despite his heritage, Dōmeki does not have the ability to see ghosts or spirits, though he can sense them and has a natural ability to exorcise them. He is part of the school's kyūdō club and excels in school competitions. Dōmeki barely speaks unless explaining folklore or asking Watanuki for meals.
-----
from me:
Doumeki acts like somewhat of a springboard of Watanuki's own character development, and unfortunately he doesn't change a whole lot. He gets his own moments though, where we see that despite his kind of cold exterior he's beginning to act more like himself around other people. Despite being kind of a static character, I enjoyed his presence as a character. His interactions with Watanuki are funny, and they bring out the best in each other despite the fact that neither of them would admit it.

from the wiki:
Yuuko Ichihara (壱原侑子) is introduced in xxxHolic as a witch who runs a shop. She grants wishes to customers in exchange for something of equal value, which can range from precious objects to abstract concepts. At the beginning of the series, she hires Kimihiro Watanuki as her assistant in exchange for protecting him from yōkai. She constantly speaks of inevitability and how nothing is a coincidence while dealing with several of her guests.
-----
from me:
Yuuko is lazy and an alcoholic and likes to give mysterious prophecies to Watanuki as an answer to a question he wants a straightforward solution to. This makes her sound annoying, but actually she's pretty cool. Everything about her from her style to her attitude is over the top, and she keeps Watanuki moving forward (and working at her shop forever). She "grants wishes" kind of, but she mostly tells people how to solve the problem and they don't listen. Some would call her a scammer or con artist, but I disagree simply because the people who pay her just don't take her advice. That isn't really her problem is it? 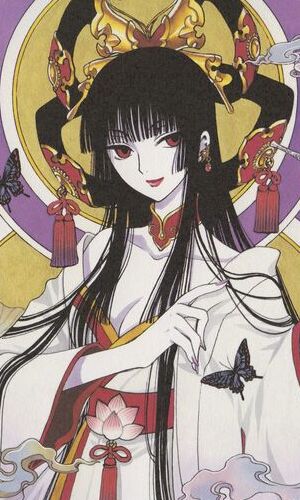 from the wiki:
Himawari Kunogi (九軒 ひまわり) is Watanuki's love interest and classmate. She is very cheerful and friendly around Watanuki and Dōmeki. However, though Watanuki is very open in showing his feelings and admiration for her, she appears oblivious to the fact that he likes her. Watanuki often invites her to join him for various outings, but Himawari usually has some prior engagement, which comically and inadvertently leaves Watanuki alone with Dōmeki.
-----
from me:
Himawari is a silly little side character, but for a love interest she's kind of lacking. We aren't really given any particular reasons why Watanuki is so in love with her; but to be fair crushes in highschool usually have very little reason anyways. I'm not the kind of person that needs every little detail in order to justify a character. She's nice, and gives a few scenes a cute little cheerful atmosphere, so overall, I like her. 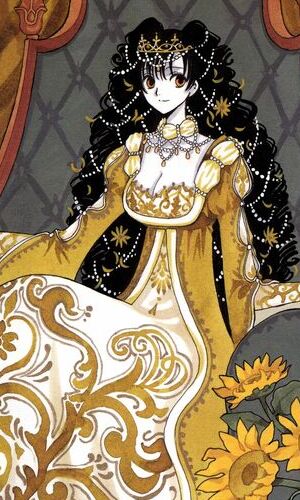 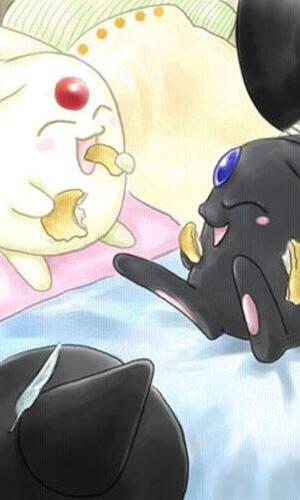 from the wiki:
Mokona Modoki (モコナ＝モドキ) refers to a pair of two rabbit-like creatures created by Yūko and Clow Reed in preparation for the events in Tsubasa: Reservoir Chronicle and xxxHolic. The white Mokona travels with Syaoran's group, while the black Mokona stays in Yūko's shop. Both are based upon the original Mokona of Magic Knight Rayearth, whom Yūko and Clow encountered while Mokona was traveling through different worlds. Mokona provided Yūko and Clow with the knowledge of alternate dimensions.
-----
from me:
Kuro Mokona is a dreadful little creature and I love it. It's full of mischievious tendencies, and mimicks Yuuko's alcoholic tendancies. Also occasionally it spits out objects that Syaoran sends it. Very useful. 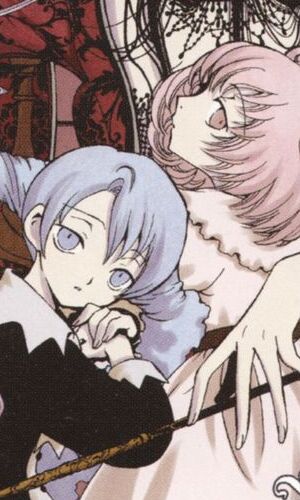 from the wiki:
Maru (マル) and Moro (モロ) are two artificial beings that keep Yūko's shop in existence. They are energetic and often speak in unison and repeat the words of others. They cannot leave the shop, as they have no souls. They help Yūko around the shop most of the time, but often go into long periods of hibernation due to the difficulty of keeping the shop in existence.
-----
from me:
Maru and Moro do little more than say silly catchphrases and tend to Yuuko, so there isn't much I can really say about them character-wise. I think they're fine I guess, their speech patterns are kind of cute and it's a fun idea for Yuuko to have her own little entourage.

here are some manga panels I like quite a bit 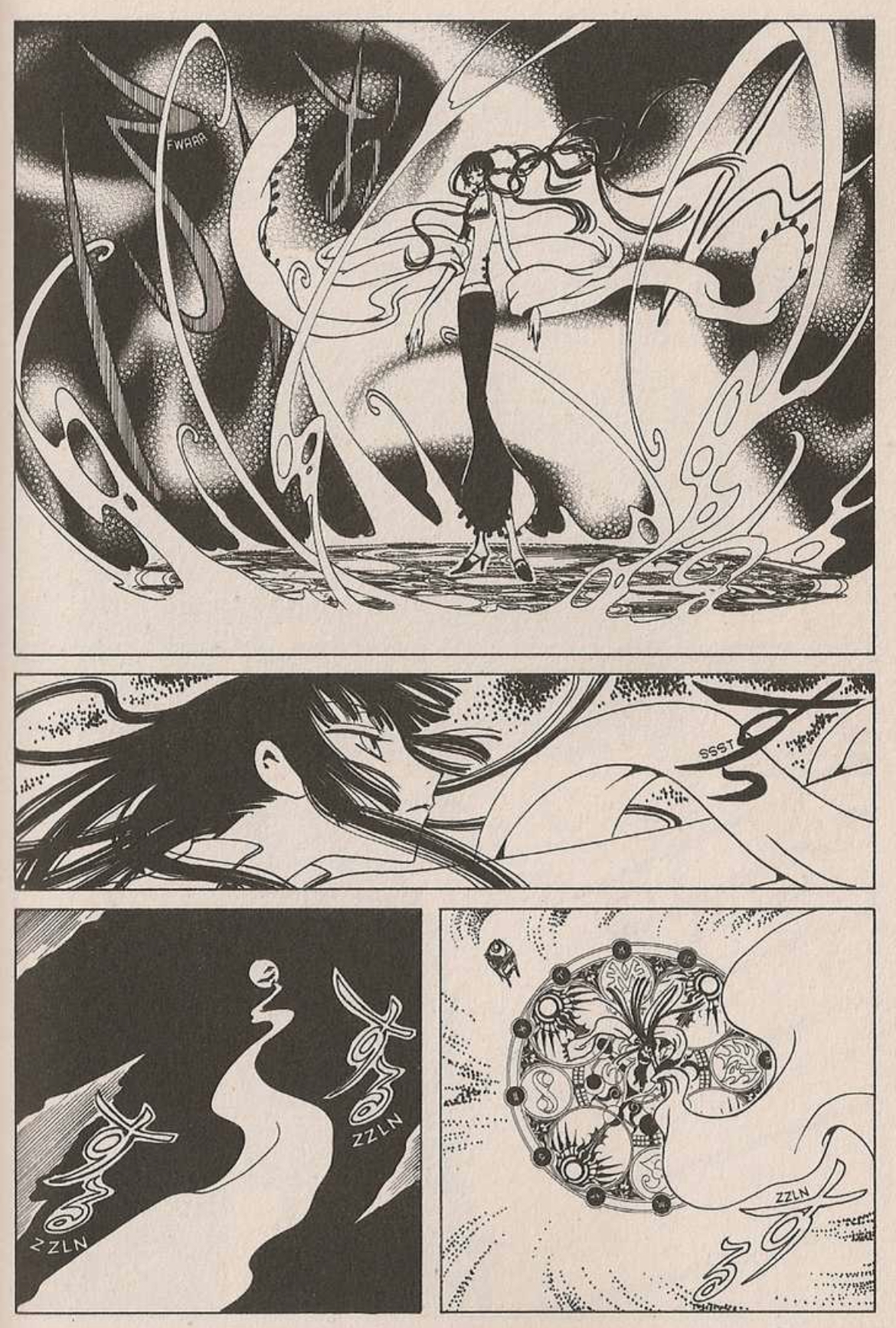 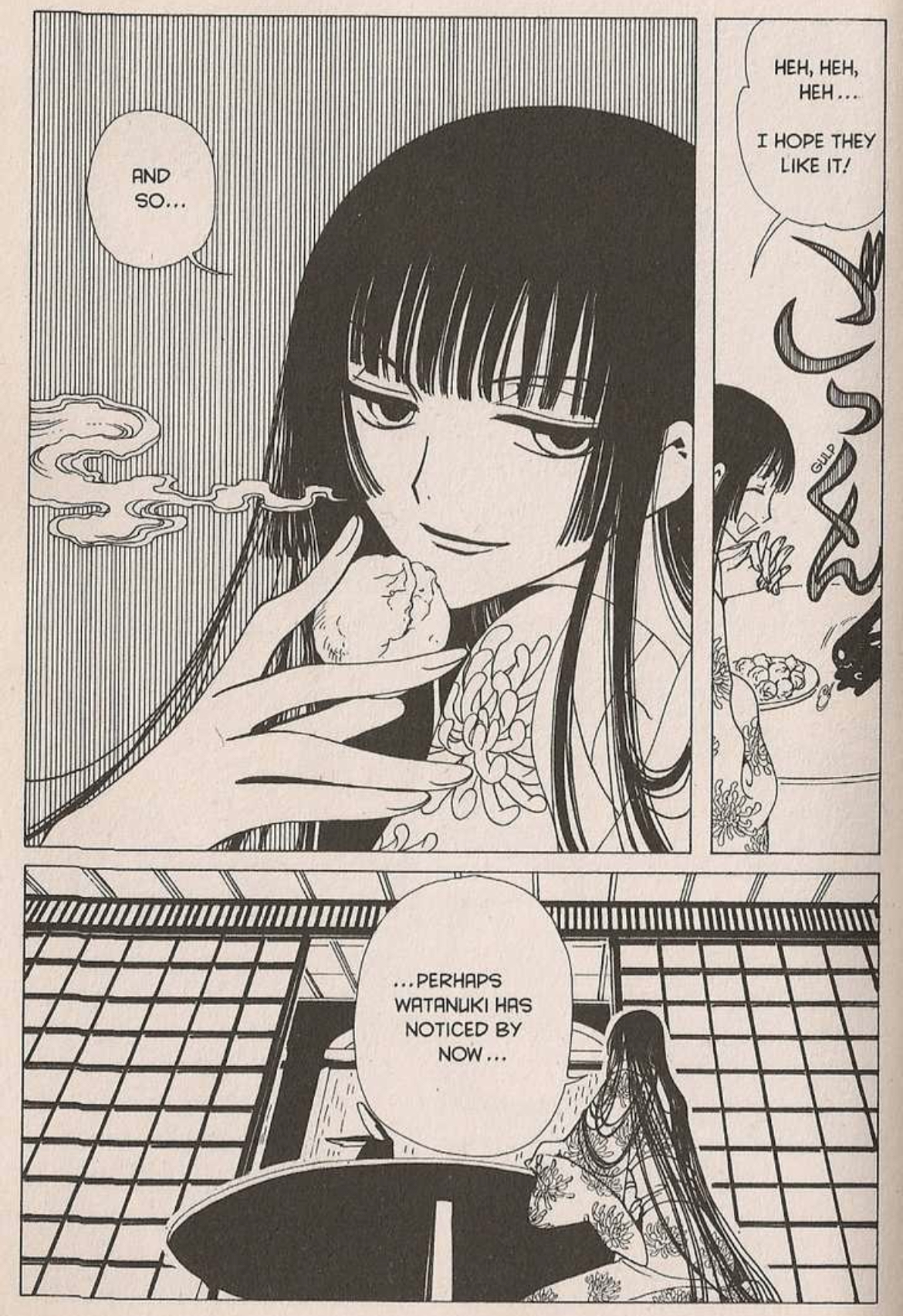 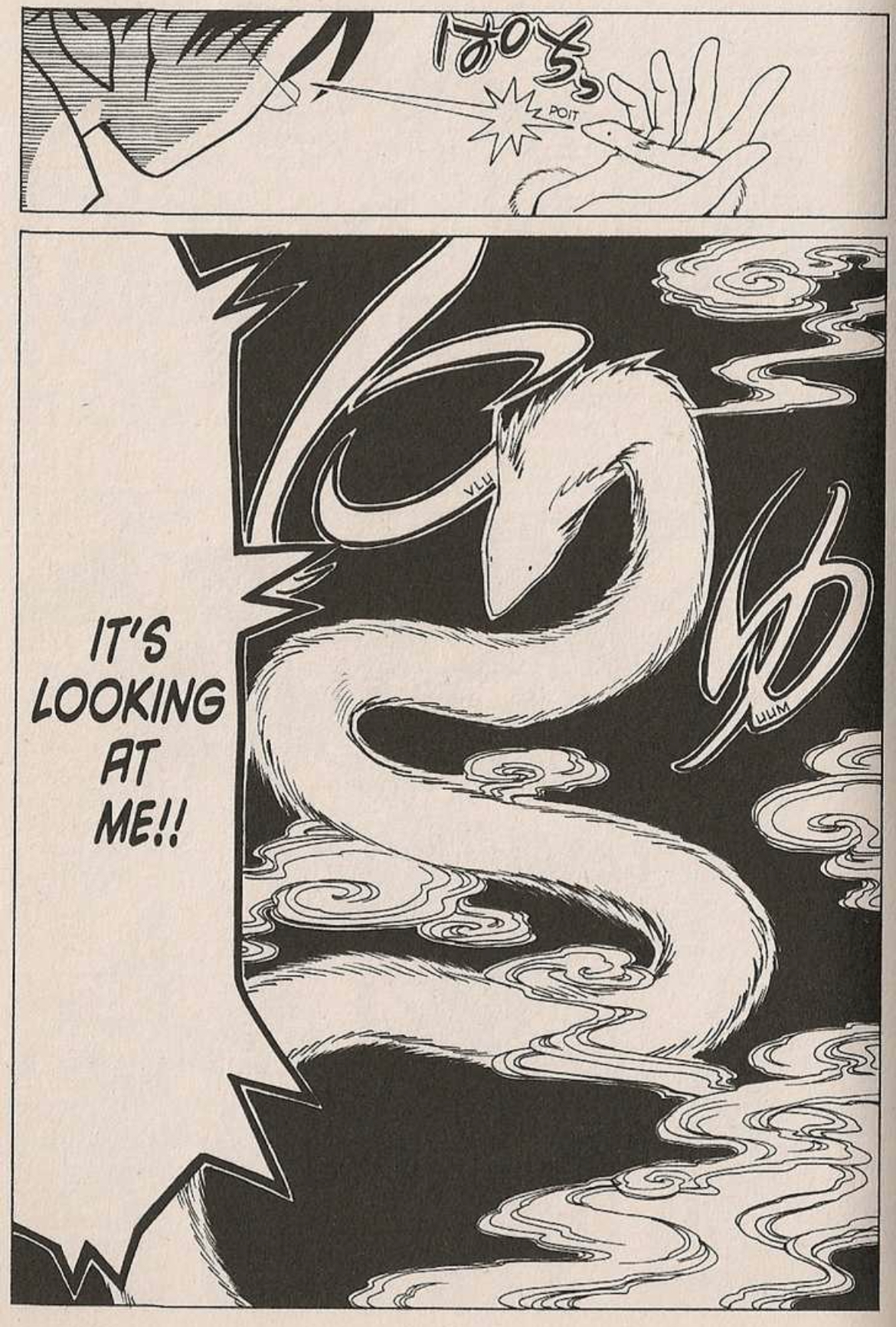 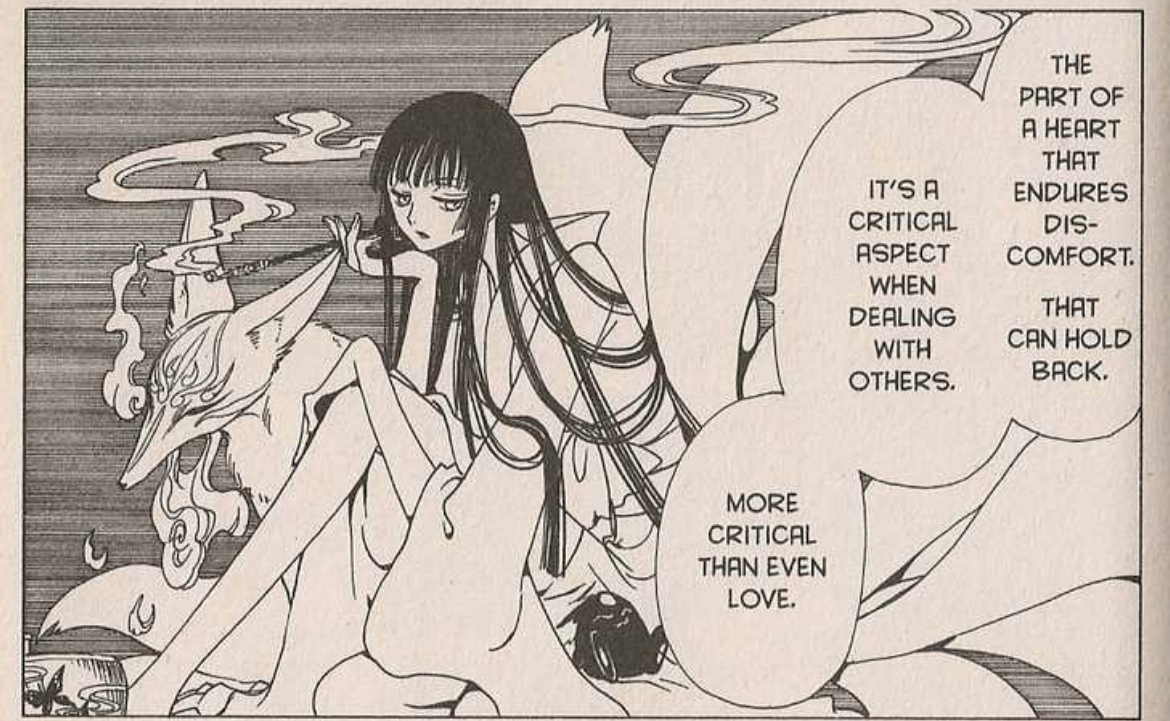 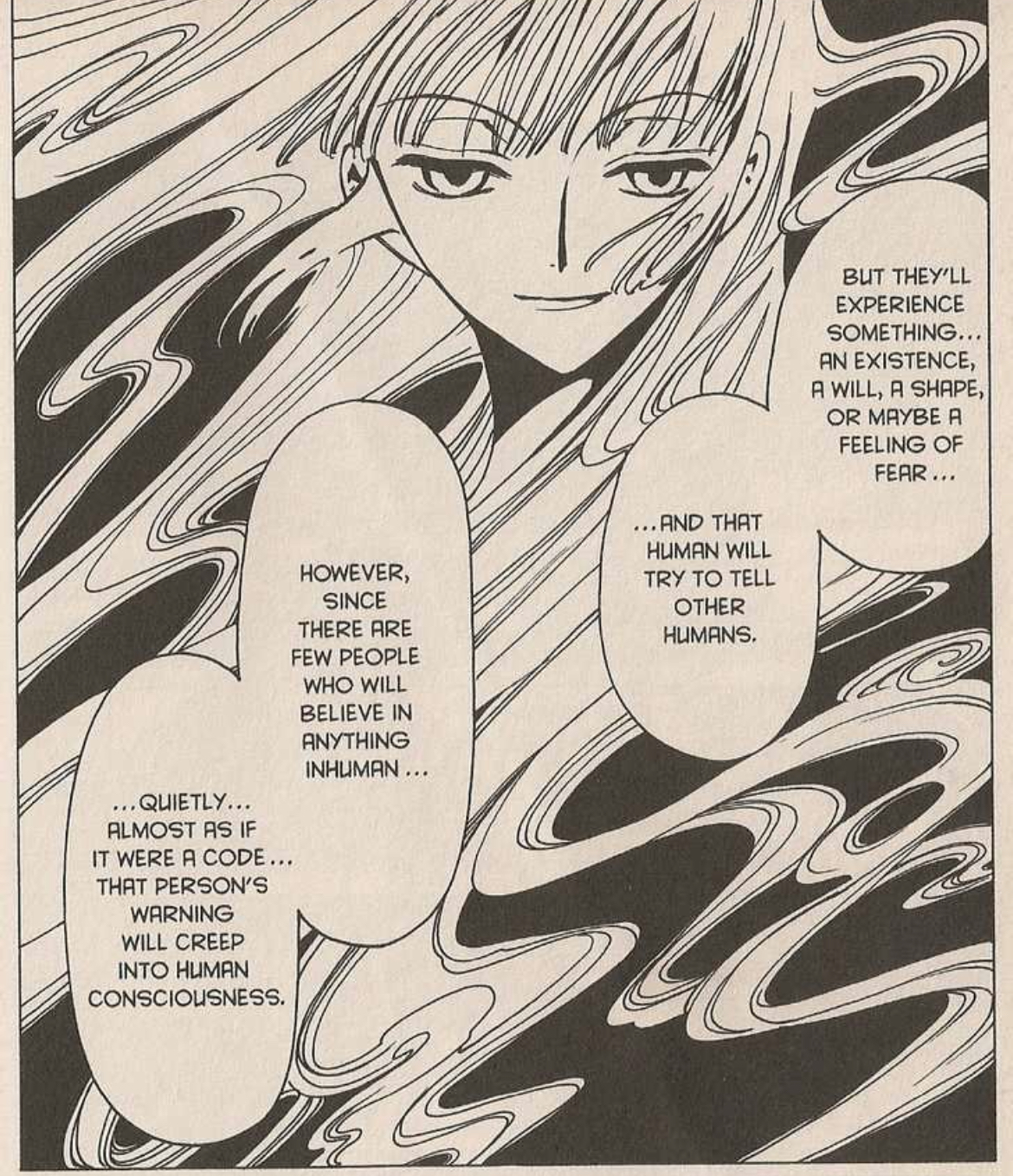 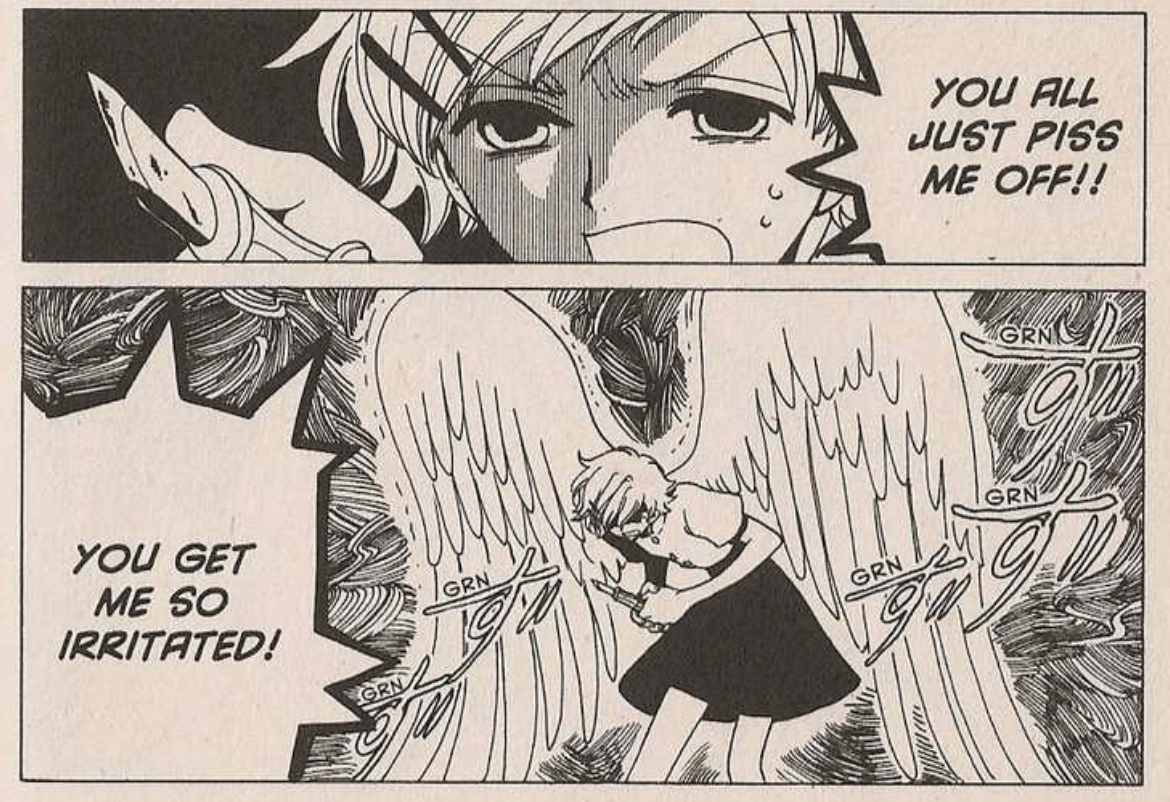 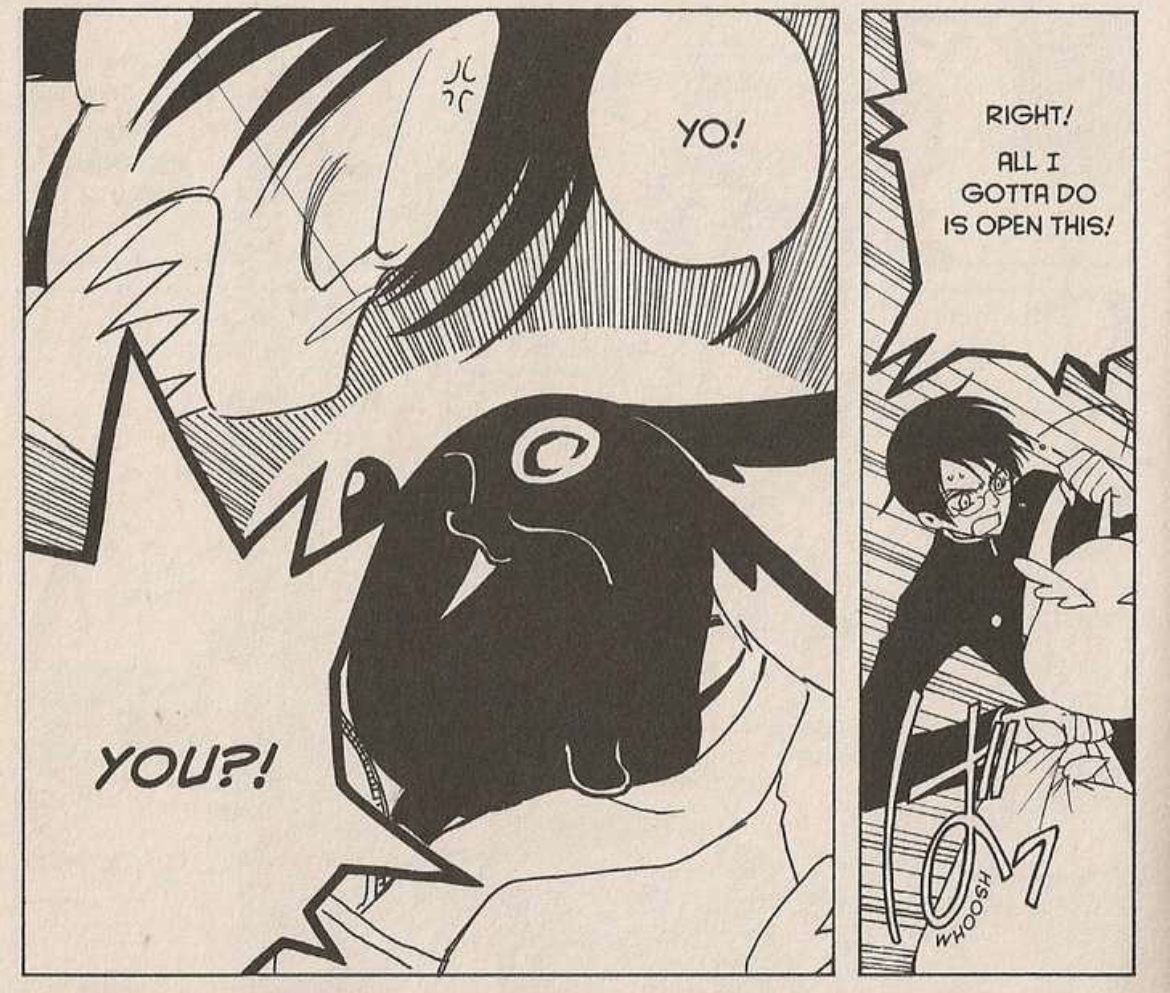 click to read a nice little analysis of some of the philosophy of HOLiC (not super spoiler heavy but still! talks about some of the later arcs, so I recommend reading the manga beforehand!)